Fifteen years ago, NDSM in Amsterdam Noord was at risk of becoming a boring, generic development. Today it is Europe’s largest broedplaats (breeding ground) for makers, inventors and artisans. NDSM is an enormous shipyard with a second life at the heart of an emerging economy.

The booming era of shipbuilding at NDSM can be compared to the glory days of car building at the Packard Plant in Detroit. Workers in both cities endured hard lives in the factories, yet their jobs gave them some sense of security, purpose and belonging. While their industries were thriving, they were proud to be part of a bigger identity that gained worldwide respect.

That purpose-driven work is long gone. Our need today is for new jobs that are meaningful and sustainable; in other words, the future is about making and doing things of enduring value rather than a life of empty consumption.

In particular, what can developers and friends of Detroit’s Fisher Body Plant, Packard and other emotionally-charged industrial sites learn from the nature of work at NDSM and other emerging models? And how can my hometown of Detroit reflect its roots as a place for inventors?

In many ways NDSM shows us new, healthier ways of working in an innovation-friendly setting. This rough-edged creative habitat is the antidote to disturbing stories about “a world without work” and armies of job-replacing robots. The NDSM raises and responds to several pressing questions:

It’s unlikely that these answers will ever be found here:

The polished, anonymous “office park” developments of the post-industrial era were known for killing any sense of identity while draining the creative energy out of its hapless victims. The resulting recipe for alienation, conformity, false illusion of predictability, and norm of complacency was not a recipe for innovation.

So how can a place help us thrive by creating new job opportunities, rather than to merely survive as consumers?

Below are five essential ingredients which draw on NDSM and the model pioneered in 1994 by Margie Zeidler at 401 Richmond St West in Toronto as well as other creative hubs such as Evergreen Brickworks.

Life at 401 Richmond St. West and painting “What Would Jane Jacobs Do?” 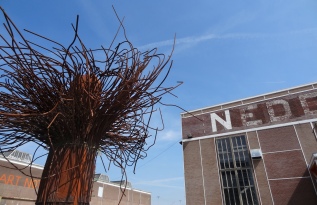 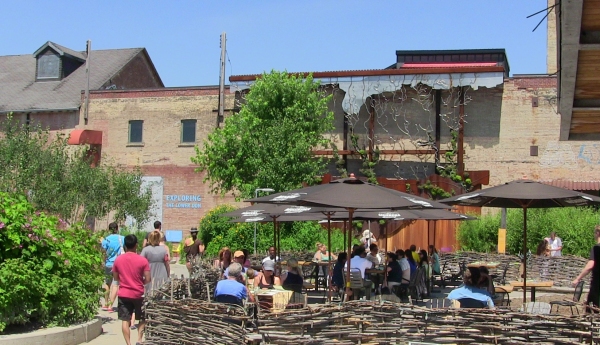 2. ROOTS: Humans have an innate need to be part of something bigger and more enduring than themselves. Tangible historical connections have an effect on our mental health–they are not simply about being sentimental. Shiny office parks are depressing in part because they are rootless. 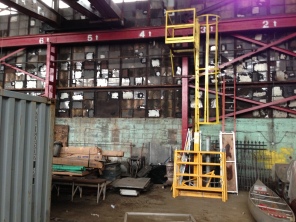 3. IDENTITY: The NDSM not only has its own special character, it encourages 230 creatives to express their individual identity. The design of each studio has a different personality, yet the whole effect is pulled together by strong structural elements. These expressions spill over to enliven shared spaces (which would be forbidden in an office park).

4. INTERACTION: The future of work and job security will be through human relationships and collaboration. The NDSM encourages idea development and fluid work arrangements by providing a variety of stimulating, changeable spaces that attract people with shared interests.

LEFT: from the Diego Rivera mural at Detroit Institute of Arts   RIGHT: A face in the hood by Tyree Guyton at the Heidelberg Project, Detroit.

5. SHARED OWNERSHIP: Whether through a formal shared ownership agreement (example: NDSM) or a sense of ownership instilled by the owners (example: 401 Richmond W) it is essential that people feel they have a personal stake in something that is enduring. 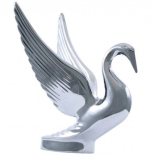 My ideas for the Packard Plant combine respect for the past with the rough edges that feed a new generation of innovators. I believe that to be a truly healthy place, it must inspire people to build their identity around things they create, not around things they consume.

One thought on “How rough edges inspire innovation”